After the 9/11 attacks 20 years ago, security officials in Washington, D.C., sprang into action. The Pentagon had been attacked, and it’s thought that United Flight 93 that went down near Shanksville, Pa., was headed for the U.S. Capitol building.

The measures changed how Americans access their government. And while there have been some alterations over the years, new threats show yesterday’s security may not be enough now.

Back after 9/11, Jonathan Wackrow, a former Secret Service agent, says law enforcement was acting on near-real-time intelligence “coming out of Afghanistan and other localities that were focused on vehicle-borne explosive devices, suicide bombers, those type of threats that we really hadn’t faced here in the United States.”

But University of Virginia architecture professor Elizabeth Meyer has another term for what Washington turned into: a “landscape of fear.”

“What’s happened to the public landscape of Washington is more than the architecture of bollards and the immediate choreography of security and risk adjacent to public buildings,” she tells NPR. “It’s the total change of flow and accessibility that everyday citizens used to have to seats of power.” 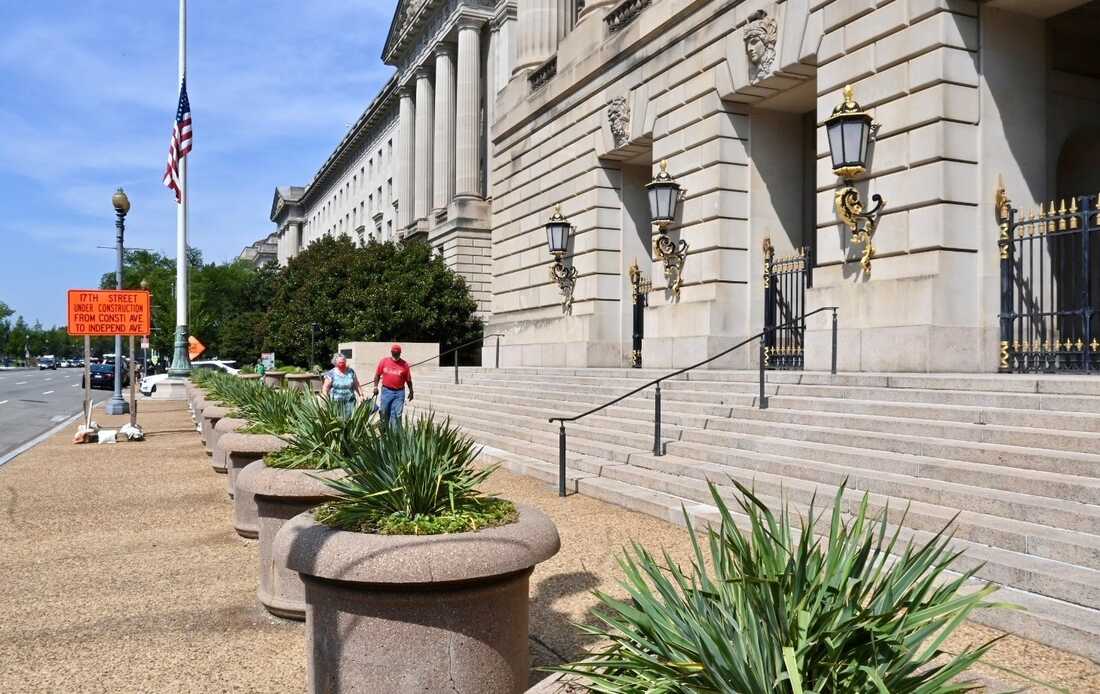 Heavy planters are seen on Constitution Avenue in Washington, D.C., between the Environmental Protection Agency and Commerce Department buildings.

Meyer wistfully remembers bringing classes up from the UVa campus in Charlottesville and sitting on the Capitol steps overlooking the National Mall.

“To be sitting with 100 people on the steps of the West Front of the Capitol, no security anywhere,” she says. “And in fact, while at that time there was a little bit more locking of doors, you could still walk in, just walk into the building.”

Those days have long since passed. Security really began to harden in Washington, D.C., after the 1995 Oklahoma City truck bombing, which destroyed the Alfred P. Murrah federal building there, killing 168 people. Soon after that, the stretch of Pennsylvania Avenue that runs in front of the White House was closed to traffic.

“There is a balance”

And after 9/11 Meyer says security officials went into “hyperdrive.” They installed metal detectors inside buildings, and outside forever altered D.C.’s appearance.

“Our conception of the public space of the city is dramatically different,” says Meyer, a former member of the U.S. Commission of Fine Arts. “And our sense of connection to the federal staff who support democracy is much more isolated and removed.”

That worries Edward Feiner, who served as chief architect of the General Services Administration, which oversees federal buildings.

“We should never lose sight that the citizens of this country, they own the government, and you can’t separate that government from the people,” he says.

A berm around the Washington Monument serves as a vehicle barrier that blends in with the surroundings.

In the years since 9/11, there’s been a gradual adaptation to the security environment. Landscape architects have designed berms, like at the Washington Monument and in front of the National Museum of African American History and Culture, that serve as vehicle barriers but unobtrusively blend in with the surroundings.

“There is a balance,” Feiner says, but he warns that “if you balance too hard on separating the government from their people, the people, then the terrorists have won because that’s exactly what they want.”

And for all of the security measures taken after 9/11, neither vehicle barriers nor a newly constructed visitor screening center stopped a pro-Trump mob from overrunning the Capitol on Jan. 6.

Former Secret Service agent Wackrow, now chief operating officer of Teneo Risk, a security consulting firm, says the response after 9/11 to build barriers and bollards was appropriate at the time. But he says security needs to be adaptable.

“I think that the way we need to think about this is first understanding that threats never remain at rest,” he says. “They’re dynamic, they’re unpredictable and they’re constantly evolving.”

So while some of the latest threats to the government come from foreign actors hacking government databases and infrastructure, at the same time officials must also now plan for domestic-based physical threats.

One case in point is an upcoming rally near the Capitol for supporters of those arrested Jan. 6. A person familiar with the discussions tells NPR that Capitol police are planning to reinstall a fence around the building to protect against that threat.

We aren’t as vigilant as we should be Curtis Sliwa